Red Power to Pierce Through

Dual Lance is the first boss from RayForce.

A small battleship being built at the asteroid front line base in Operation Area 1. It received codename "DUAL LANCE" from the shape of its main guns which resembling a pair of long lances. Its body is divided into twin power units and a bridge section of the center. The power units can be detached should one of which is heavily damaged or destroyed. As the bridge section is well-armored and heavily armed the warship still combat capable even if only bridge section remains.

Dual Lance appears to be equipped with a high-performance ECM, its EM waves interferes with optical sensors and causes visual distortion in which a bright red stream can be seen in the surroundings. 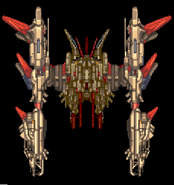 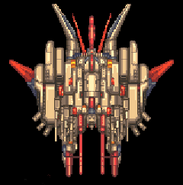 Bridge section only
Community content is available under CC-BY-SA unless otherwise noted.
Advertisement