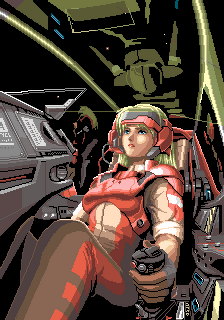 F-04 is the protagonist from RayForce.

F-04 is a female android developed for combat, made in the image of an engineer's daughter who was in coma due to an accident.

Though she wasn't developed to have emotions, one day she mysteriously began having dreams, apparently having somehow attained the memories of the engineer's daughter she was modeled after.