Nerva 4R-MISS is an enemy from RayStorm.

Along with a laser ship in the armed uprising of the Secilia Union, it was taken by the Secilia Union and put into an operation for earth invasion. The purpose of this ship is a missile attack from the satellite orbit to the ground. Even in this era when energy weapons became the mainstream, missile ships that could be used for various purposes by changing the warhead were indispensable. However, this ship, which was aimed at a missile attack on the ground, is vulnerable to other attack and defense systems, and is often placed behind the center of the fleet. 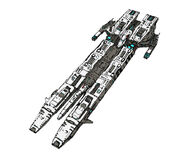