R-Gear is a playable spacecraft exclusively available in RayStorm HD.

R-Gear was developed before Barca Section started researching "RAY" overtechnology. Its primary armament is a pair of detachable laser cannons on the upper fuselage called "GEAR". When detached, the GEARs will automatically seek out and destroy the locked target. As the mass production of R-Gray series uses spare parts of this ship, the R-Gear bears some visual resemblance to the R-Gray series.

GEAR's control system is said to have been incorporated into R-Gray series' "AX-11 Radar Fire Control System" which controls the lock-on laser targeting. So far the system only able to control two GEARs simultaneously as only two GEARs can be installed in a single craft due to its bulky size.

As R-Gear doesn't comes equipped with the Cybernetics Link System, it can be manned by an ordinary pilot. The R-Gear is equipped with unlimited mode as its special function that unleashes the ship's maximum potential, however only a few pilots can withstand it so that it's only can be operated within short duration. 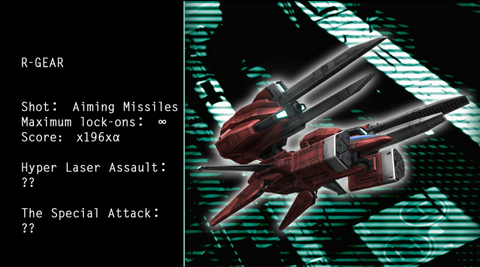 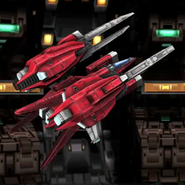 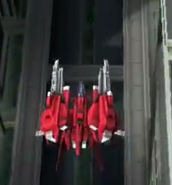