"This well-rounded ship is equipped with both Shot and Lasers. The shot weapon can be improved with power-ups, granting it a wider field of fire. The Lock-on Laser can be improved to fire from five to eight beams. The maximum score multiplier is x128."
― Help description from mobile version

R-Gray 1 is one of the three playable spacecrafts in RayStorm.

One of two spacecrafts secretly developed by the Barca Section as the last resort weapon against military might of Secilia Federation. R-Gray 1 is available in two versions, type A (Auto) with computer-assisted Lock-on Laser targeting and type M (Manual) which incorporates Cybernetics Link System interface.

Armaments including two wide-pattern laser cannons and lock-on laser targeting system which allows up to eight targets tracked simultaneously. Should all eight lasers locked on a single target the system will launch hyper laser which causes area-effect damage. The lock-on laser also can be set to bombardment mode for wide-area bombardment.

In Raycrisis, R-Gray 1 and R-Gray 2 can be unlocked by clearing Original mode using all three Wave Riders. While overall looks and performance are the same, it has more powerful lock-on laser and Special Attack compared to WR-01R's albeit lacks of flexible lock-on laser crosshair the latter has.

Space Invaders Get Even[]

R-Gray 1, along with the classic Space Invaders UFO and Silver Hawk from Darius series were made as downloadable player character. The R-Gray 1 is armed with its dual laser cannon and lock-on laser, but hyper laser and special attack are both absent. The lock-on laser automatically locks on targets in front of player and always fired in full salvo of eight.

R-Gray 1 and Silver Hawk ARCF-ROTA PLUS from G-Darius as well as various characters from other Taito classic titles (Space Invaders, Bubble Bobble, Elevator Action, etc) appeared as cameo in "Be a Good Buyer" minigame.

Yujin released the second volume of their Shooting Historica series gashapon in 2008 which features ships from these shooting games:

In December 2011 Kotobukiya released a 1/144 scale plastic model of R-Gray 1. Two pages of backstory materials are included within the manual. 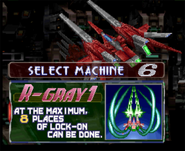 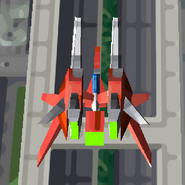 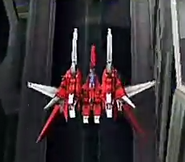 R-Gray 1 icon in Space Invaders Get Even
Community content is available under CC-BY-SA unless otherwise noted.
Advertisement