Edit
watch 01:36
We're Getting Mutants in the MCU - The Loop
Do you like this video?
Play Sound

"This ship is equipped with lasers capable of locking on to a large number of targets. Its Shot weapon has a narrow field of fire, but it compensates for that with greater destructive ability. Initially able to fire upon 8 targets, its Lock-on Laser can be improved via power-ups to engage up to 16 enemies. The maximum score multiplier is x256."
― Help description from mobile version

R-Gray 2 is one of the three playable spacecrafts in Raystorm.

One of two spacecrafts secretly developed by the Barca Section as the last resort weapon against military might of Secilia Federation. Not unlike R-Gray 1, R-Gray 2 is also available in two versions, type A (Auto) with computer-assisted Lock-on Laser targeting and type M (Manual) which incorporates Cybernetics Link System interface.

Armaments including two "shadow" lasers and thunder lock-on laser targeting system which allows up to sixteen targets tracked simultaneously. When sufficiently powered up, the primary laser leaves a residual trail which damages enemies it touches. The thunder laser is unique to R-Gray 2 - instead of simultaneously tracks all locked target it fires single lightning bolt that jumps into the next locked target and will keep jumping until the last target is hit. When fired on a single target (non-hyper laser), the lightning bolt will keep hitting the same target as many times as it got locked on. As the lightning bolt doesn't travel instantly, strategically picking targets to lock is the key to keep the lock-on chain going for maximum lock on multiplier.

Should all sixteen lasers locked on a single target the system will launch Hyper Laser which creates a small black hole upon target's position The lock-on laser also can be set to bombardment mode for wide-area bombardment. 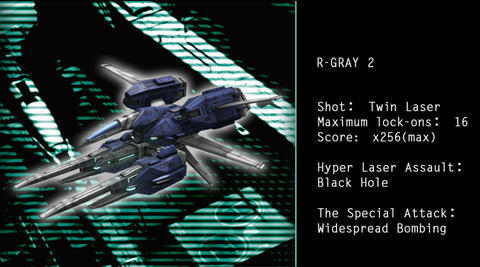 In Raycrisis, R-Gray 1 and R-Gray 2 can be unlocked by clearing Original mode using all three Wave Riders. While overall looks and performance are the same, it has more powerful lock-on laser and special attack compared to WR-02R's albeit lacks of flexible lock-on laser crosshair the latter has. 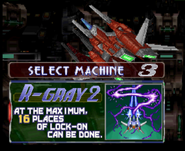 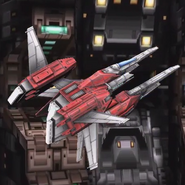 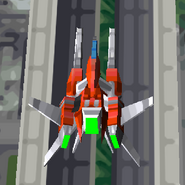 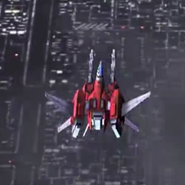