Sem-Slut (Sem-Strut in North American/European version) is a huge antibody that guards Emotion Part. It takes shape of a red (grey in Special Mode) transforming mech.

Sem-Slut starts in mecha form which initially has three attack patterns. It starts out with cluster bullets (which can be destroyed using Lock-on Laser) from its shoulder cannons then starts spraying two-way bullet patterns from its head followed by a swing from its arm blades which leaves a curved fiery trail in front of it.

After performing its head vulcan and blade attack for the second time, Sem-Slut transforms into mobile armor form and start firing missiles until either it dives into lava or the launchers are destroyed. Before it starts diving into lava, the boss will launch four pods that leaves trails of electrical spheres. The spheres are destructible but will track the player as soon as the pods leaves the screen. When diving inside lava, Sem-Slut will move in zig-zag pattern while launching destructible cluster bullets. After firing about ten shots, Sem-Slut resurfaces.

Once its shoulder cannons and arm blades are destroyed, the Sem-Slut will permanently stays in mecha form with only two attack patterns. First it sprays four-way bullet patterns horizontally then it throws a pair of energy spheres that shoots needle lasers in 360 degree pattern. The boss will keep repeating these two patterns until it dies. 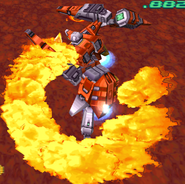 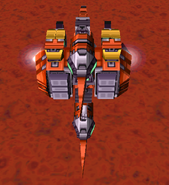