WR-03 is the third playable Wave Rider type in RayCrisis. In the original arcade version, this ship has to be unlocked by accumulating certain amount of play time however this ship is made available from start in the home console ports.

The WR-03 plays very differently compared to your average Ray-series ships. Its main weapon is an all-directional homing missile barrage (tap shot button for faster firing but fewer missiles per shot) and its Photon Torpedo lacks of Hyper Laser capability but can hold up to 24 lock-ons at maximum with unique lock-on chaining method. Instead of per single-shot-kill, the multiplier is counted per hit landed by lock-on laser with maximum of x255 (as in other two types of lock-on lasers). 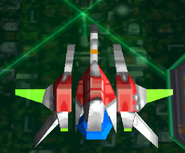 In-game model
Add a photo to this gallery
Retrieved from "https://layersection.fandom.com/wiki/WR-03?oldid=450"
Community content is available under CC-BY-SA unless otherwise noted.